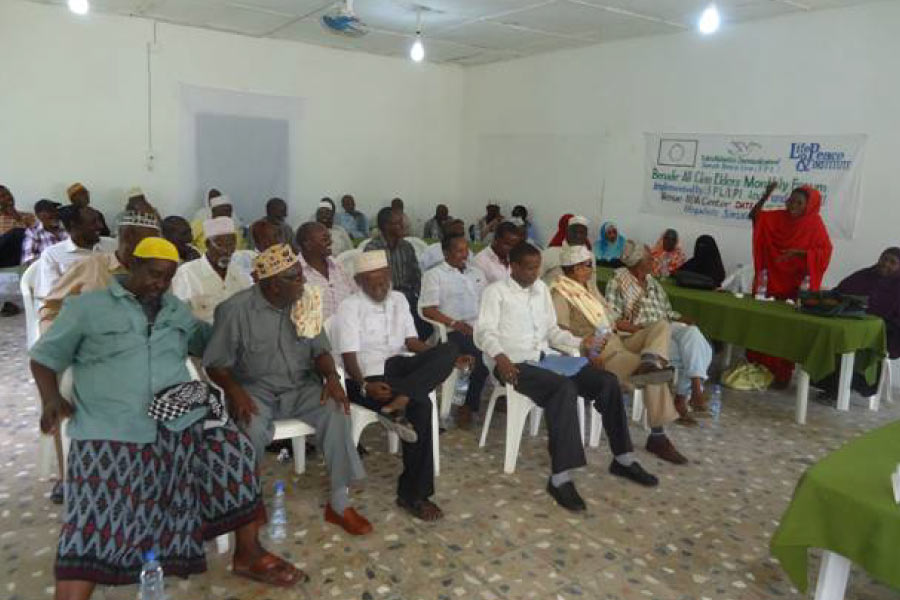 All Benadir Clans’ elders meeting on stabilization of Benadir region

The all Benadir inter-clan monthly forum was held at IIDA conference hall on 25th June 2012.

Almost 50 people from all Benadir councils of elders, women groups, youth and religious leaders have attended the meeting. In the meeting the elders and other civil society groups discussed the current security problems in Benadir region and what can be done by whom and the role of traditional elders in stabilization of Benadir region.

During the discussion, the participants identified security problems including illegal checkpoints for clan militia, extortion money, and rape, robbery of private properties, killing, and closure of public service centers by armed men.
To tackle these security problems they suggested the following points:
• Better collaboration between the public and government especially district administrations and police forces should be established
• The traditional elders should constantly pass on community concerns to district administrations, police, regional administration and top political leaders
• Neighborhood system should be established in districts
• Illegal checkpoints by clan militias should be removed through negotiations or other means
• Peace committees consisting of elders, women groups, youth and religious leaders should be established in the districts
• The neighboring district should collaborate on security issues
• The public awareness on the government system should be enhanced
It was also talked about the different groups who have the responsibility of dealing with these problems and among the groups discovered were elders, women, youth, district administrations, regional administration and ministry of internal affairs and national security.
The participants agreed on that traditional elders have central role in the stabilization of the Benadir region including coordinating community with the government, providing advice, raising public awareness on security, resolving community conflicts, peace advocacy and building inter-clan relations.
Finally the participants thanked Somali Peace Line and Life and Peace Institute for the facilitation of this meeting and their regular support in Somali peace building process.